Behind Every Door is a series of success stories featuring those who have been served by the Virginia Beach CDC and the regional outreach of Second Act Communities.

Since 1985, the Virginia Beach CDC has housed over 6,200 individuals who we refer to as our "neighbors." Edna Foxx is one of those neighbors.

It was early morning when I arrived to interview Edna, but Atlantis Manor was awake. The sun was shining on the lawn. Residents were on front porches chatting and a neighborhood cat was on the prowl.

I imagined this must be a very nice place to live. I told Edna as much when she opened her door, and she smiled. "Atlantis Manor is very nice, very peaceful," she told me. "People are kind. I love my neighbors."

Edna wasn't always in such a peaceful place. Before finding VBCDC, Edna moved around between apartments at the oceanfront, trying to find a place that would fit both her comfort and her income. It was important to her that she stay in this area - Edna has 5 children, 21 grandchildren, and 3 great-grandchildren living in and around Virginia Beach.

Then Edna was referred to VBCDC by the Department of Human Services and she was able to rent an apartment at Atlantis Manor, which has rents designated affordable to those earning 50% of the area median income. Atlantis Manor connects persons with mental disabilities to an on-site office of the Department of Human Services and is also the location of a VBCDC satellite office.

Edna moved in January of 2007 and she's been stable and living at Atlantis Manor ever since. "I wish there were more places like this for people," Edna said. "Whether they have physical disabilities or mental disabilities, it comes in real handy."

She loves her one-bedroom apartment, saying it is the perfect size. She enjoys playing car racing video games when her grandchildren come to visit. But what does she enjoy most about Atlantis Manor? Edna says, "It's the peace and quiet. That's my number one favorite thing."

Gina is the Leader, Marketing & Community Relations and spends her days (and lots of evenings) telling everyone the story of VBCDC and Second Act Communities. 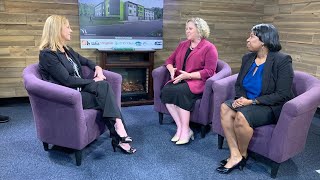 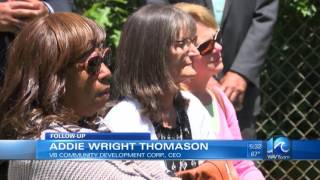